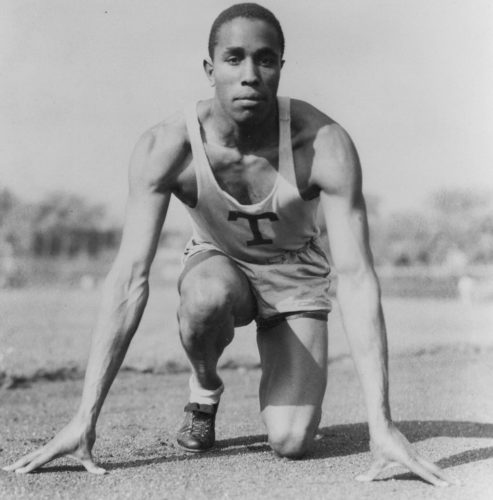 Voted as first Black track captain of Tufts University, he also played baseball and boxed, making him the most versatile athlete from New England.
An outstanding student in the College of Engineering, and a member of Tau Beta Pi national engineering honor society and Phi Beta Kappa, he excelled equally academically. Perhaps the description of him in his class yearbook best measures his impact on his Tufts community: “We will never forget Eddie Dugger, who is one of the finest athletes Tufts has ever had. He is unaffected by the fame he has attained and his leadership and ability will never be forgotten.”

A captain in the Air Force Reserve, he served as one of the military’s first Black aeronautical engineers. Holding the position of Chief of Scientific and Information Office at Wright Patterson Air Base, he played an important role in the formulation and testing of materials used in advanced air and space programs. He authored over 100 scientific papers, lecturing throughout the US, Europe and Asia.

A dedicated and active civic leader, he served on the board of the YMCA, the United Fund of Dayton, United Health Foundation, Wright-Patterson Credit Union, Dayton Athletic Club, Selective Service Board, NAACP, Urban League, Frontiers Club and Bethel Baptist Church. A 33rd degree Mason, he presided as Grand Master for the State of Ohio.