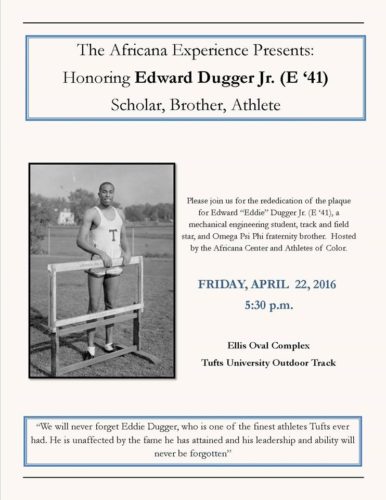 The Peerless Scholar and Athlete

The brothers of Omega Psi Phi Fraternity, Gamma chapter join in the rededication ceremony at Tufts University on April 22, 2016, to honor of our past Basileus (1940), Edward Dugger, Jr. Brother Dugger, considered among the greatest athletes from New England, shined equally as a scholar and as an incomparable track champion. Throughout his scholastic and athletic careers, he elevated the standard for defining the student athlete. Through his unparalleled athletic performance and exceedingly high aspirations for intellectual attainment, he stood peerless.

The eldest of six siblings, he grew up in the historic Black neighborhood of Medford. Supported by a strong family and encouraged by an engaged community, Dugger viewed academic and professional achievement as a way to counteract the discrimination and racism of the early twentieth century. He followed the examples of his father, a Lieutenant Colonel of the 372nd Infantry, and his mother, a graduate from Portia Law School, both dedicated and transformative community leaders.

Prior to his reign at Tufts, brother Dugger, received great recognition as a high school student for his exemplary behavior as a young man, and his prowess as an athlete. As a high school student, the community of Medford and the Omega Psi Phi Fraternity both bestowed upon him medals or recognition. In college, Dugger won over twenty-four New England Intercollegiate, Eastern Intercollegiate, Amateur Athletic Union, Penn Relays, and the Nation Collegiate titles, in the broad jump, the one hundred and the two-hundred-yard dashes, and the hurdles. 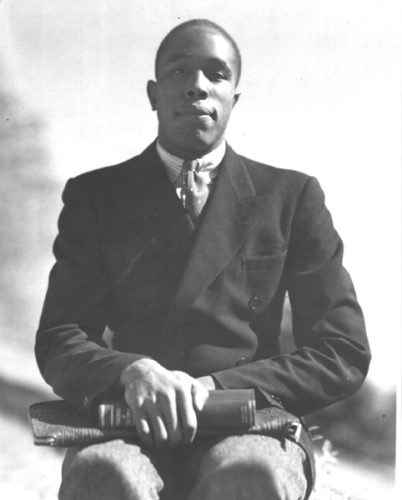 Dugger further bridged the barriers of race and class by the versatility of his campus involvement and his leadership. Voted by his white teammates as the first Colored captain of the Tufts indoor-track team, and the co-captain of the men’s outdoor-track team, Tufts awarded Dugger the Williams Bennett Scholarship for best portraying the sportsmanship and loyalty of Tufts.
An outstanding student in the College of Engineering, he merited a place as a member of Tau Beta Pi, the national engineering honor society. Tufts also named Dugger to Tower Cross, the senior honorary society and the highest non-scholastic award that a senior can obtain. In student leadership, Dugger served as the secretary of the senior class , the Vice President of the Tufts Athletic Club, and Basileus of the Gamma chapter of the Omega Psi Phi Fraternity, Inc. Perhaps the best measure of Dugger’s impact on the Tufts community is the description of him in his class yearbook:

“We will never forget Eddie Dugger, who is one of the finest athletes Tufts has ever had. He is unaffected by the fame he has attained and his leadership and ability will never be forgotten.”

After graduating from Tufts, Edward continued to compete in track each year through 1949 despite working full time as an aeronautical engineer. He won the National AAU indoor hurdle championships in1944, 1945 and 1949. At the age of 28, he missed qualifying for the 1948 US Olympic team in the high hurdles by one place when he placed 4th in the event at the trials. 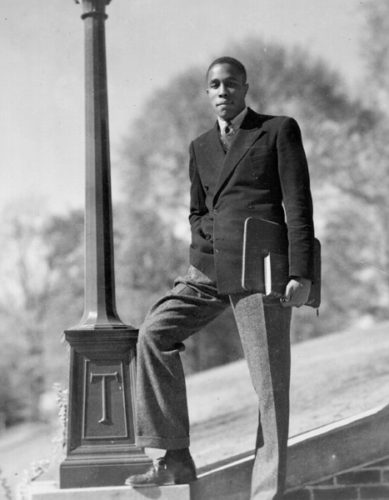 During his career, Edward played an important role in the formulation and testing of materials used in some of the nation’s most sophisticated Air force and space programs. In addition, he authored more than 100 scientific papers which he presented at scientific lectures throughout the USA, Europe and Asia. Groups he addressed included: the 1960 Third International Symposium on Non- Destructive Testing in Tokyo and the 1964 Conference on Scientific and Technical Information and Documentation in Rome, Italy. In addition, in 1968 he organized and chaired the First Materials Engineering and Science Exposition and Conference of the American Institute of Chemical Engineers held in Philadelphia.

In the latter year, he became Chief of the Engineering Lab section from 1951-1954 when he then became Senior Project Engineer until 1959. From 1959-1960, Edward was the Lab Chief of the Applied Mechanics Section and later the Lab Technical Manager for Information Processing of Air Force Materials. In 1968, Edward became Chief of the Materials Information Branch. 1975, Tufts honored Edward again. In recognition of his accomplishments as an “eminent engineer”. 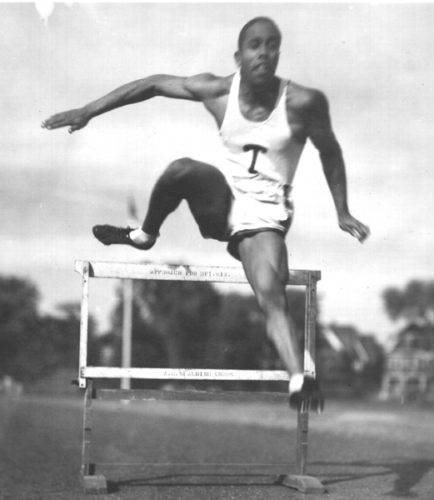 His active contact with sports continued after he retired from competing in track. He became a popular football and basketball official at several Midwestern schools and colleges. In addition, he helped form several neighborhood teams in Dayton to compete in local Jr. Olympic meets and was very active in the Dayton Athletic Club.

He also served as director or trustee of: the United Fund of Dayton, United Health Foundation, Wright-Patterson Credit Union, Dayton Athletic Club, Selective Service Board, NAACP, Urban League, Frontiers Club and Bethel Baptist Church. Edward was particularly active in the YMCA first serving on the board of the Fifth Street Branch YMCA and later on the board of the metropolitan YMCA.