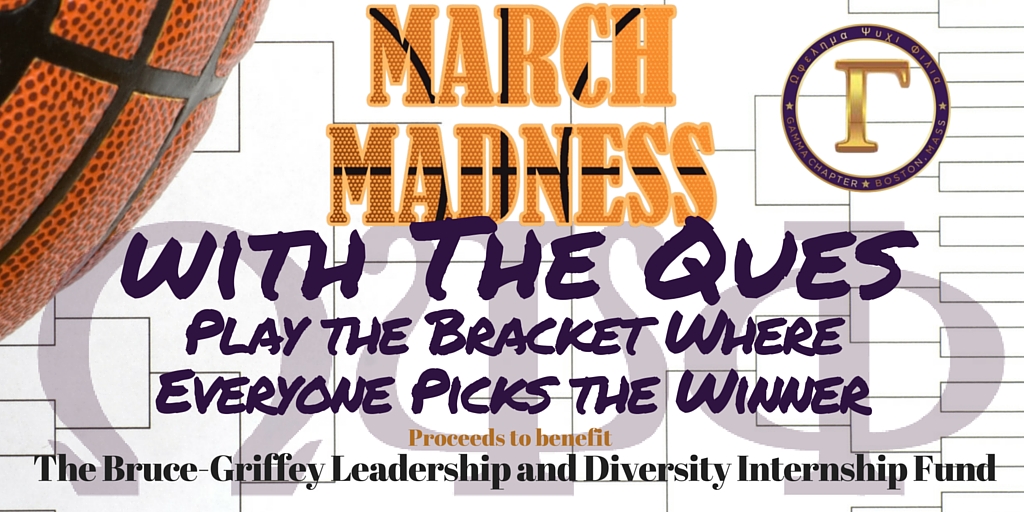 Everyone Wins When a Great Cause is the Champion

Every year, millions participate in March Madness bracket pools attempting to pick the winners of the NCAA basketball tournament. As work suffers, significant others are neglected, and friendships put on hold, brackets inevitably bust. So to unite rivals, save relationships, and make everyone a winner, we merged our love for March Madness with our desire to help a special cause.

Now whenever you check your bracket or see anyone tuned into a game, you know that you are the real winner because you helped make a great cause a reality.

1. Search for the "Madness with the Ques" group,
2. Login to ESPN Tournament Challenge (you can login with Facebook),
3. After you login, enter the group password "Bruce Griffey". Good luck!

Each year to celebrate Women’s History Month our bracket focuses on a cause or charity that promotes or honors women. So we are glad to select The Bruce-Griffey Leadership and Diversity Internship Fund that honors the legacy of two great women; Lena Bruce and Anita Griffey. This important fund provides a stipend to a deserving college student pursuing a summer internship in service.  Through the generosity of people like you, the fund helps defray living, travel, and transportation expenses for an awardee.  This makes the opportunity for valuable professional and development experiences attainable, exemplifying Lena and Anita’s commitment to leadership, helping others, and improving their community.

About Lena and Anita

Lena, graduated from Tufts University as the only African-American woman in her class to a degree in electrical engineering.  Active in the Tufts and Boston communities, she often volunteered to tutor and mentor local troubled youths.  Lena begun working at Stone & Webster Engineering Corporation after completing her studies and was viewed by the company as an employee of full potential.  Wonderfully intelligent and committed to her education, Lena truly improved the lives of those around her.  Tragically, just two months after her graduation, an unknown intruder murdered Lena in her Boston apartment. Her murder went unsolved until October of 2015, when a DNA match revived her cold case.

Anita, a political science major at Tufts, served as the President of the African-American Society and co-founded a student chapter of the NAACP.  A hardworking, campus leader, she humbly and intensely committed herself to improving her college community.  During her senior year, while traveling to another campus to assist others, Anita died as a passenger in a tragic automobile accident.  She is remembered as a dedicated today as and addressing injustice at every turn.

Both women were 21 years old at the time of their deaths and active members of the Xi Tau Chapter of Delta Sigma Theta Sorority, Incorporated, an organization dedicated to community service.