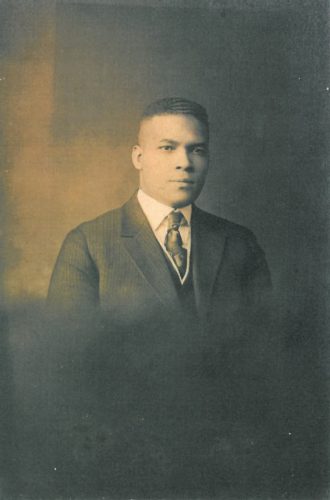 Originally from Henderson, Texas, Wallace attended Lincoln University, where he pledged to serve the cause of Omega on the charter line of Beta chapter. Graduating in 1915, he journeyed north to Boston with his line brother, Albert Sidney Beasley, to study medicine.
Among many of the first Black medical students at Boston University, he prepared the foundation for our Fraternity’s legacy at this institution, and brought many of his fellow medical school classmates into Omega’s fold. After graduation, Wallace relocated to Oklahoma as one of the Black professionals who opened the golden door to the historic Black owned businesses and communities there.

As president of the first “Colored” Hospital Association, he led an effort built upon a spirit of self-help within the Black community to organize, fund, and establish the first “colored” hospital in the state of Oklahoma. In 1922 the Okmulgee Black Hospital successfully opened to serve Black citizens, many who were Creek Freedmen. Wallace served as the first physician and superintendent, assailing the widespread and systematic exclusion of Black professionals from white hospitals, and fulfilling the larger purpose- providing hospital-based medical care for Black and native patients.

Wallace later moved to Oakland, California where he continue to practice medicine for many years.