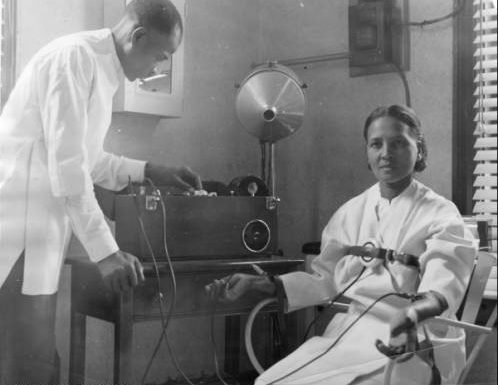 Dr. Middleton arrived to an Indianapolis, at the height of statewide KKK control. Through his undeniable excellence, a hospital that once would not accept him to its staff, now honors his contributions by marking the main street of the medical campus with his name. Raised in segregation, at age 10 he watched his mother lay seriously ill as a white doctor refused to treat her. As a youth conscious of the inferior treatment endured by Blacks, he committed to righting such injustices by becoming a physician.

After graduating Benedict College and serving in WWI, he aspired to attend Boston University Medical School. Deficient in the advanced sciences, typical of students educated in the south, he worked as a Pullman porter while his lifelong friend, Benjamin Mays, tutored him. BU accepted Middleton conditioned on a successful additional year in the liberal arts school.
As a doctor, Middleton remained subjected to systemic racism in medicine. He recounted in Boston clinics, “patients refused to be examined by Colored doctors”, and in Indianapolis, “no hospital extended privileges to Colored physicians”.

Despite his advanced education, training, and qualification, and even memberships in both the Indiana and the American Medical Association, the Indianapolis Medical Society would not accept his membership, a requirement for staff appointments to the hospitals. Undeterred, he set up his own practice as a cardiologist, with a specialty in electrocardiograms and heart irregularities, and eventually convinced City Hospital to permit him to serve as a volunteer every Saturday in the outpatient heart clinic.

His persistence and skill altered the racial opinions of the hospital faculty until eventually they relented their discriminatory practices. Within 11 years, all Indianapolis hospitals admitted Middleton, breaking the color barrier for all future physicians of any field, staff and patients. Middleton stands as the first Black doctor to practice at a hospital in Indianapolis, the first to present a professional paper published in a medical journal, and one of the first physicians of any race in Indiana to use EKG technology.
A professor at Indiana University, philanthropist and civic leader, his community involvement extended beyond the practice of medicine. He established the Morgan Health Center, chaired the state campaign for the UNCF, and most notably actively led the YMCA, earning him the distinction of man of the year.