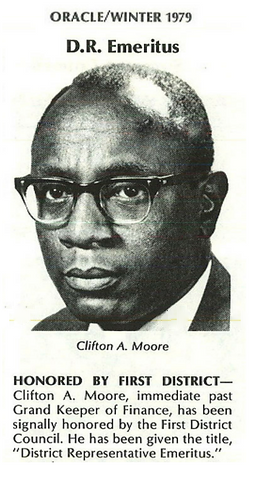 On December 5, 2017, surrounded by his loving family and wife of 61 years, former Grand Keeper of Finance and First District Representative Emeritus, Brother Clifton A. Moore, Sr., entered Omega Chapter. In a storied career of accomplishment and service, both to family, Fraternity, and community, Bro. Moore now abides in the pantheon of First District immortals with Bros. Bullock and Tucker.

Bro. Moore attended Boston University after serving in WWII’s European theater. Majoring in business administration, he established an enviable scholastic record. Pledging Gamma Chapter in 1950, his duty to Omega began as a neophyte, working to host the 36th Grand Conclave in Boston. Thus, began his steadfast dedication and commitment to our Fraternity. He swiftly ascended to chapter leadership, serving as basileus of the third chapter.

In 1955, Bro. Moore, along with eleven other men, began Iota Chi Chapter in his native Cambridge, Massachusetts. With community service as the impetus, Brother Moore again assumed leadership, serving as the chartering basileus, and later earning Omega Man of the Year recognition. His recurrent character, diligent devotion to service, and exaction of excellence, decreed the archetype for this new chapter; a model emulated even now, where it has earned the distinction of District Chapter of the Year four consecutive times. 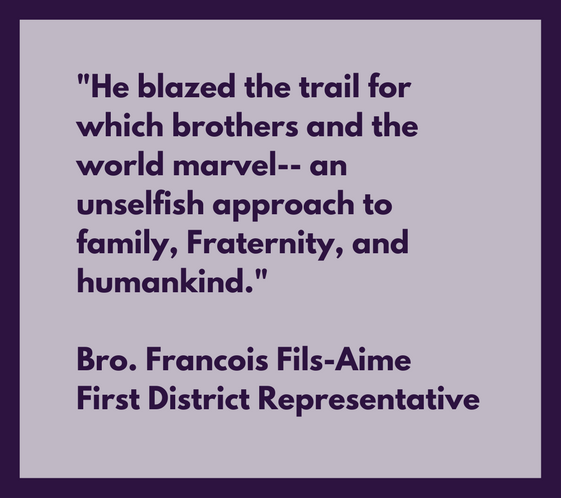 Reflecting on Bro. Moore’s significance, Bro. Francois Fils-Aime, First District Representative said, “As the last charter member to depart this earth, Bro. Moore remains a strong force. He leaves an enduring impression for Iota Chi Chapter to follow. He blazed the trail for which brothers and the world marvel– an unselfish approach to his family, fraternity, and humankind.”

Bro. Moore would bring this same ethic to Sigma Nu Chapter in Rhode Island, where he would apply his credentials as an accountant and fiscal manager to the office of District Keeper of Finance. His mindful stewardship would raise him to election as the First District Representative. There, he operated with such noted distinction, he would later represent the interests of other District Representatives on the Supreme Council. 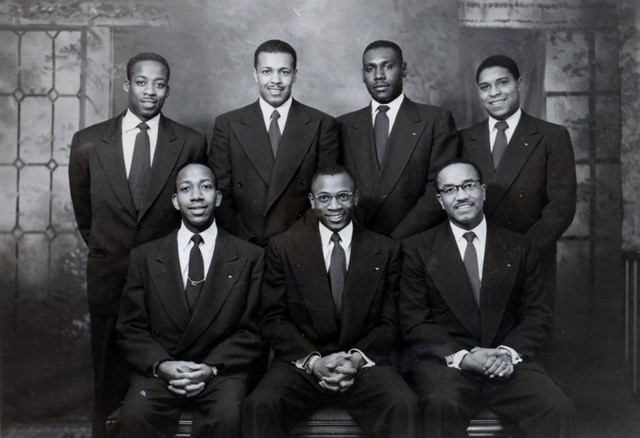 The 1950 Gamma chapter line with Bro. Clifton A. Moore seated at center.

At the 1974 Grand Conclave in Phoenix, Bro. Moore won election to the office of Grand Keeper of Finance.  Selection to a grand seat as a lifelong member of the First District, one of the smallest in Omega, is a testament to the respect and admiration Moore garnered across the Fraternity. For several years prior, he served vitally in the fiscal operations of the fraternity. From Chairman of the special fiscal committee of the Supreme Council to an exacting member of the National Budget Committee, Bro. Moore always exercised precision.  When the proposal for a national fraternal monument came before the Supreme Council, Bro. Moore ensured all involved remained fiscally responsible as he scrutinized each round of budgets through completion. Bro. Moore would go on to win reelection at the conclave in Atlanta.

On September 15, 1979, the members of the First District Council unanimously voted in session to acknowledge Bro. Moore’s years of meritorious service to the Fraternity at the local, district and international levels, by bestowing upon him the title of District Representative Emeritus, proclaiming, “…with this enactment you shall enjoy membership to the First District Council for life.”

A champion of small business, he actively promoted the industrial growth and development of minority entrepreneurs. An unparalleled civic leader, Bro. Moore made ascension into business ownership and success possible for those historically overlooked and ignored. The University of Rhode Island awarded him an honorary doctorate in 1976, citing his inimitable aide to others and acute business acumen. As president of the Business Development Company, a state chartered privately owned organization, he sourced vital seed money for new or growing businesses he could show had potential but whom conventional lenders regarded too risky.

Honored at the 2016 First District Conference with induction into the Gamma Sterling Circle, Bro. Moore stands on the right with his line brother and prophyte. Photo credit DJG Studios.

Seated often as the only Black member, director or even as president of many boards or companies, the Rhode Island newspaper recorded his stature as, “the highest business post attained by a Black man in the state’s business community.”  The 1980 Oracle lauded “Moore is a most active traveler along various byways of community service. At last count, he held 11 directorships, and his list of committee memberships, awards and activities, past and present, Black and white, fills nearly a typewritten page.” The executive director of the Rhode Island Urban League summed it up best saying, “He has no peer in the Black community… He’s tough all right, but if you get through his scrutiny of your proposal, you can get through anyone’s.”

Brothers travelled to Rhode Island to wear the gloves for a man who influenced so many. From the 1950 Boston Grand Conclave, to an honoree at the 2016 District Conference, Bro. Moore remained the formidable fixture of the First for nearly 70 years.

Bro. DeMarr Vass (Gamma 2016), selected as a pallbearer, encapsulated the legacy of Bro. Moore in sharing, “My time in Omega began seated in the home of Bro. Moore. Awed by a true bridgebuilder who had achieved so much for so long, he still had time to share his pictures and remembrances with me. Now, as the keeper of finance, I carry Bro. Moore home today at this service, but I will carry on his legacy in my own aspirations forever.”