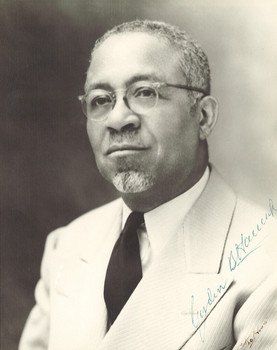 Dr. Hancock, a prominent leader against all forms of segregation, stood as a leading spokesman for equality in the generation before the civil rights movement. As an activist, he reached broad audiences on the subjects of school-desegregation, voter-registration, and antipoverty through his ministry, in countless speeches, and in a weekly column syndicated in 114 newspapers. Focusing on Black self-help, he coined the term “Double Duty Dollar,” which meant Blacks should patronize Black-owned businesses to help force employment stability and a sense of independence in their communities.

An honor graduate of Colgate, Harvard, and Oxford, his parents, both formerly enslaved, had encouraged him to get an education to “serve the race”. He answered as the innovating educator and professor emeritus, who taught the first college level course on race relations in America, and linked education to activism, requiring students to perform community service.

Brother Hancock was instrumental in convening a conference of Black Southern leaders in Durham, North Carolina and a primary contributor to the Durham Manifesto that called for African Americans to reject the racial status quo in the South and to press for the right to vote.